Stephanie Mayer is an author, founder of CHF, life coach, songwriter, and musician from Raeford, NC. She has received acclaim for songs she’s written for several recording artists. They can be heard on Twinkie Clark’s “Live in Detroit CD” (Sony BMG), Gold Certified “WOW Gospel 2005 CD” (Sony BMG/Verity Records), Dorinda Clark-Cole’s Grammy Nominated “Take It Back CD” (Gospocentric Records), Bridgette Campbell’s “Give You Thanks CD” (produced by Daniel Weatherspoon), The Pace Sisters’ Stellar Nominated “Access Granted CD” (Tyscot Records), among others.
Ms. Mayer attended North Carolina A&T State University and Wayne State University to receive a Bachelor of Arts Degree in Psychology.  She has received additional music training from NC A&T State University and Livonia Conservatory of Music in Livonia, Michigan.  Stephanie received her Life Coach Certification under the instruction of one of the nation’s top coaching experts, Tony A. Gaskins, Jr. and she is currently studying for a Master’s Degree in Christian Counseling. Ms. Mayer’s passion is to inspire young leaders through the arts and mentoring. 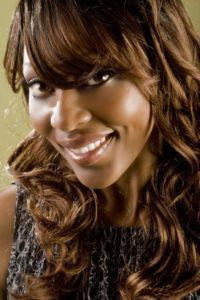 Lashon Hayes is a vocalist, teacher, and native of Fort Lauderdale, Florida.  She is a dynamic singer extraordinaire who has developed a tremendous passion for music and arts that ultimately propelled her into a career in music.  It is this electrifying voice that has also been afforded the opportunity for national exposure backing some of gospel music’s leading recording artists to include: the Miami Mass Choir and Twinkie Clark and Friends Live in Charlotte (produced by Grammy Award Winner Cedric Thompson), among others. The honor of singinging on these projects has resulted in registry on the Gold Certified WOW Gospel 2005.

Lashon Hayes qualifies her trained musical competence through the matriculation of the Dillard School of Performing Arts and North Carolina Agricultural & Technical State University where she earned a Bachelor of Arts Degree in Music.  She taught music in the Broward County Public and Wayne –Westland Schools respectively. Her diversity has also expanded her career to theatre.

Lashon is an established entrepreneur in the Raleigh- Durham area. An encounter with Lashon Hayes will leave listeners amazed and inspired as she continues to be a catalyst for unprecedented change in the world.